Last weekend during “the Summer” Vicki and I attended the National Pet Show having been invited to attend back in the Winter. It was a pretty mad few days with the South of England Show on the Sunday/Monday of the weekend before followed by shearing our herd on Friday. Having finished at 8pm, we then packed up in preparation for driving to London’s Excel Arena on Saturday at 6am!

We were the only alpaca breeder at the show and featured in the “Animal Zone”. Vicki did the Saturday with the help of her little brother – also Chris – in setting up. I joined Vicki on the Sunday which gave us both a chance to look around the rest of the show. We took three boys – Obelix, Neptune and Oberon.

The show is really well attended and we spent two days talking constantly and asking questions. The first questions are invariably “Are they Llamas?” and “Do they spit?”. Happily we were on hand to educate. The two days were punctuated by trips to Costa Coffee and checking out if any of the exhibits were relevant to alpacas – watch this space!

Alpacas always generate a huge amount of interest and if we could breed mini alpacas who could thrive on roof gardens, we would have emptied the farm in a day! As it was, the press did feature us and in particular Obelix in The Daily Telegraph: http://www.telegraph.co.uk/news/2016/05/08/pictures-of-the-day-8-may-2016/obelix-the-alpaca-at-the-national-pet-show/

We hope to have spread the word as far as alpacas are concerned and also hope to entice members of the animal loving public to venture out to Sussex to try their hand at alpaca walking. 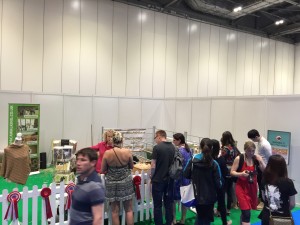