This weeks CBBC programme “Down on the farm” featured Spring Farm’s alpacas on CBeebies – and Vicki was centre stage. On the 18th March Spring Farm Alpacas was the setting for Down On The Farm. This is a brand new five-part series for CBeebies, which explores the outdoor world of farming and the countryside. From livestock to harvesting, presenters JB Gill and Storm Huntley discover where their food comes from and how it’s grown. JB and a production crew visited us on one of the coldest days in mid March and spent most of the day with us. 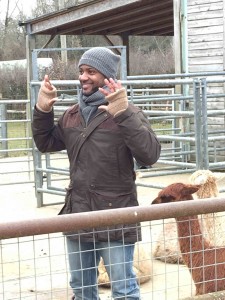 JB, Vicki, Millie and the film crew spent most of the day with us to ensure they had what they needed for the shoot. The alpacas were really well behaved and really took to JB. JB has a farm himself and is obviously comfortable in a farm surroundings and is great with the alpacas. On the CBeebies website, JB said “I spend a lot of time on the farm, so it will be great to share this experience with the CBeebies audience. This is a really exciting venture for me, and I look forward to learning more about farming throughout the show.” 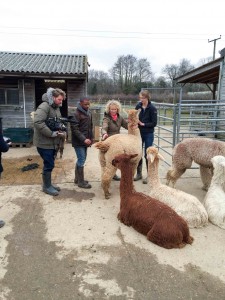 One of the great features of alpaca fibre is its luxurious feel and warmth. Never was this so needed as on the day of the shoot. The weather was cold and grey and it was a real relief to get “hands on” with the alpacas who had virtually a full years fleece at that time – they have since been sheared as we head into the Summer. 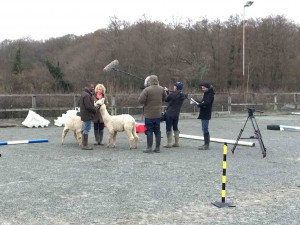 As it was too early for births, JB and Vicki spent their time feeding our alpacas, moving them from field to field and halter training. The video (CBeebies Down on the farm – series 2 episode 4) of the shoot can be seen at:

Or there is an alpaca fact file on:

We really enjoyed having JB and the rest of his crew here and the alpacas were as good as gold. It would be nice to get them back when we have field full of baby alpacas (cria) but if you are interested in buying alpacas or booking an alpaca walk in the meantime, please get in touch. 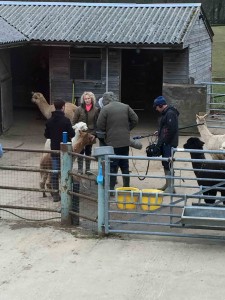