Baby llama alert! We have had out llama girls for just under a year and yesterday, Mandola gave birth to a beautiful light fawn girl! Mandola (and Suada – the two pregnant female llamas) came to us from Italy and the weather of the last few days probably reminds her of the South Tyrol where she was born!

Llama gestation is the same as alpacas and a baby llama is typically born after 11.5 months. Mandola is a first time mum but gave birth without any problems and her new cria is doing really well and suckling perfectly. She has a little coat on as we seem to have reverted into Winter today with sleet and freezing winds.

We have yet to name the little girl bit will update you when we have a name. 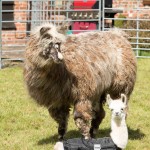 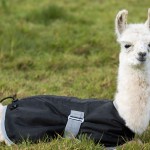 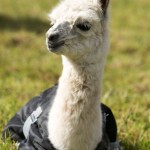 Baby llama – to be named

at Spring Farm Alpacas (and Llamas!)