One of the other things we do here at Alpaca Walking with Spring Farm Alpacas is alpaca showing. Its a bit like Crufts in that alpacas are entered within breed (suri or huacaya), then by colour (black, brown, grey etc.), then by age. Its great fun for both us as breeders and for the public who can watch the proceedings. 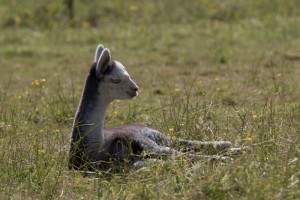 Lord Percy as a cria

This weekend, Vicki took Lord Percy to the Alpaca Showtime event in Cambridgeshire. Lord Percy was entered into the intermediate grey huacaya alpaca class and won his class – hence the rosette!

Lord Percy then was brought forward into the Champion Grey huacaya alpaca class and was awarded Reserve Champion! Well done to both him and Vicki – who missed a Bad Co. concert to take him to Showtime… 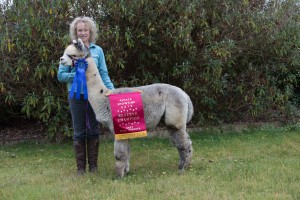 Lord Percy with his trophy’s from Alpaca Showtime