Cleavers and alpacas! Our alpacas like nothing more than browsing along our hedge lines and tucking into what they find. Unfortunately this includes cleavers (as we know them). Cleavers have many names including: goosegrass, catchweed, stickyweed, robin-run-the-hedge and apparently sticky willy. Cleavers officially is a herbaceous annual plant that loves Spring Farm. As we are in higher level stewardship we don’t use herbicides except via spot spraying for thistles and docks so we have an abundance of wild flowers on the farm. This is both good and bad with cleavers in the latter category! This is because the seeds love alpacas and alpacas love putting their heads into hedges and in so doing, pick up a multitude of the seeds which are a nightmare to get out of the fleece. 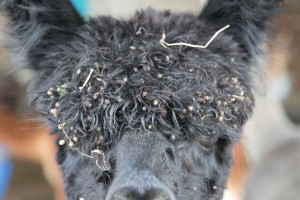 As to what have cleavers ever done for us? Ancient Greek shepherds would use the barbed stems of cleavers to make a “rough sieve”, which could be used to strain milk. Linnaeus later reported the same usage in Sweden, a tradition that is still practiced in modern times according to Wikipedia.

In Europe, the dried, matted foliage of the plant was once used to stuff mattresses. Several of the bedstraws were used for this purpose because the clinging hairs cause the branches to stick together, which enables the mattress filling to maintain a uniform thickness. The roots of cleavers can be used to make a permanent red dye. I can safely say “I did not know that” and just hope that our alpacas steer clear somewhat more than Osiria has done.