We are very proud to have added Llamas to Spring Farm in the Spring of 2015 from Italy! We now have eight llamas on the farm – three adult females (Suada, Mandola and Sophia). We have three male llamas – Isaac is now 4, Father Ted is two and Leo is nearly one. In 2022, we had 2 baby llama girls from Mandola and Sophia: Mystique and Senorita Sicily. 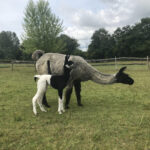 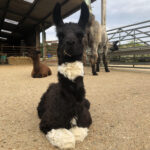 The three adult female llamas are Suada, Mandola and Sophia. They are “woolly” llamas and are very striking in their appearance. We normally (with our alpacas) use the same initial for all babies born each year, but we decided that with our llamas we would name the babies by the same initial as their mum’s. In 2018, Suada wasn’t pregnant but Mandola had a male cria who we have called Merlin. Suada’s daughter Sophia gave  birth to Father Ted in 2019 and Senor Snoopy in 2020. You may have noticed that the naming system has now gone out of the window. When Sophia gave birth in 2019, I christened her cria Shadow. The “ladies” on the farm decided this was a bit behind the times and changed it to Stormzy. After a couple of days this changed again to Slim Shady. It was then pointed out that the cria looked a bit like a vicar…so hence Father Ted. When you meet him, you will know why! 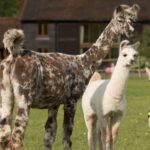 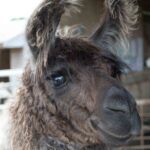 Woolly llamas can have light, medium, or heavy fleeces (which refers to the relative abundance of fibre) with minimal locking, curl, or crimp (crimp is highly valued in alpaca fiber). Their fleece, when several inches long, shows considerable “loft,” or fluffiness, and is not as slick or shiny as silky or suri llamas.

There are also silky llamas which have some curl to their hair, which is finer, shinier, and tends to form locks, with less loft to the fleece than woolly’s. Unfortunately, these characteristics seem to catch and hold more pasture debris than classic or woolly llamas, especially when they are not sheared, or only barrel sheared (a popular style), for several years. The curl and locks tend to disappear when they are cleaned and groomed for showing. 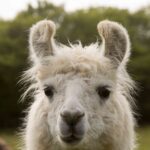 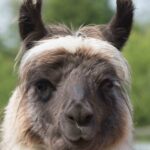 We have been training our new llama arrivals and now offer walks most days with the option of llamas: Isaac and/or Father Ted. They are gentle giants and are perhaps better suited to walking with guests as llamas have been bred for thousands of years to walk alongside man.

We normally take two llamas on each walk so if you are particularly keen to walk a llama (or not) – please let us know.

LLAMA PRESS!!! On boxing Day 2015 Shaun the Sheep encountered some new arrivals in The Farmer’s Llamas. For a sneak view try:

And then come and visit our amazing Llamas and even take them for a walk (with or without alpacas)!